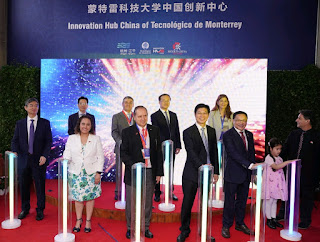 This May 16 was the culmination of a dream decades in the making.

My father, don Alfonso Araujo Alvarado, was born in the late 1930s in a small village named El Salado, in one of the poorest regions of San Luis Potosí, in Central Mexico. Through much effort and pain by the age of 10 he and his elder sister had arrived in the big city, Monterrey, to get an education. But he went from one school to another for years; he loved studying but he was considered a problem student: code words for uncouth and rustic. He barely finished course at Álvaro Obregón technical/vocational school. All through his youth he worked by day as an apprentice in dozens of places, learning plumbing, electrical wiring, construction. By night, he eagerly devoured books on industrial design and structural engineering. He lived through the last epoch of self-taught men.

And he was the greatest I ever met. All through his professional life, people called him “engineer” (we call people this way in Mexico) and he was one of the top contractors for my hometown’s biggest company: Latin America’s largest steelmaker. He was also the first to ever make a crinoline-shaped building in Monterrey. Yet, through all these successes, he kept the regret of never having completed a formal education. As my sister and I grew up, he made it his mission to give us the best education that could be found: not just the best schools, but a large library and extensive travelling from an early age. As we found out years later, he did the same for a few far-removed cousins, and not only that: also keeping it a secret, he spent decades supporting unknown Mexican inventors. All over the country, he travelled and met people who in their spare time dedicated themselves to come up with solutions to local problems: everything from small industrial processes to ideas to save beaches and mangroves.

There came a day when he let me into this little secret and he then introduced me to a large number of incredible people, all around the country. Engineers, agronomists and all kind of technicians who came up with marvelous inventions that made life better in their communities, often as small as a few dozen strong. I never forgot the impact that each of these people had on me, and especially what my father told me about them: “it is a great thing to help those wiser than you, who are in need.”

As time went by, I dedicated myself to education and to the promotion of cultural understanding between Mexico and China, and still later I embarked on my own adventure of discovery, touring scientific research centers all over Mexico. I found what my father had found decades earlier: geniuses everywhere. Brilliant people coming up with cures to diseases, systems for renewable energies, devices for treating water or new ways of manufacturing microchips. And all of them, as anonymous as the others, looking for funding that never came.

After nine years of such visits, I finally convinced TEC de Monterrey university to help: the idea was to scout for these outstanding scientists, taking their projects and helping them to transform them into viable business proposals. Being a highly entrepreneurial institution, they loved the idea: taking promising, next-generation tech and doing the necessary market and financial studies so that they could be turned into professional pitches for world-class investors. Of course, my expertise being China, I proposed coming here to do the pitches, since the Chinese government has recently developed exciting policies for technology and science, including attracting foreign talents in need of funding, scaling up, and strategic alliances. TEC was thrilled and there came three more years of preparation: project scouting, business modelling, IP protection, the works. At the same time I went through two years of negotiating with the Chinese government in Hangzhou city, first trying to convince the of the high quality of Mexican science and technology. After five visits of Chinese officials, universities, companies and experts, they were convinced and the plan was approved, and they offered a space for us in China, to create a permanent sci-tech cooperation base.

This space, a luxury penthouse in the heart of Hangzhou Financial District, was conceived as a bridge between countries, a showcase where scientists from both sides can come together and work on the problems we face as a species in the near future: health, food safety, climate change, online life and many more. After three years of those first contacts, the center was inaugurated on May 16, 2019. High officials from Hangzhou and top University Council members got together for the inauguration ceremony. From China, there were Mr. Mao Xihao, Member of the Standing Committee of Hangzhou, and Mr. Teng Yong, Secretary of Jianggan District Party Committee. From Mexico there was Mr. José Antonio Fernández, CEO of FEMSA-Heineken and Mr. Salvador Alva, the President of TEC de Monterrey.

At the ceremony, there were three contracts signed too: Mexican scientists Sergio Camacho (advanced food safety), Edgar Raygoza (nanotech) and Manuel Macías (advanced remote education) were the first to bring their revolutionary tech ideas to China.

When we got ready to cut the ribbon, there were supposed to be nine important people there, plus myself, that have the honor of directing the center. But I decided to give my place to someone else that better represents what we work for: the future. My six-year-old daughter, Alicia, the light of my eyes, cut the ribbon in my place.

This has undoubtedly been one of the most emotional moments in my professional life. It has been 12 years of travelling around, but that day was only the milestone of a beginning. A beginning of something that can be wonderful, as cooperation always is: without borders, sharing knowledge for the common good, for our common future.

Dad, I have tried to help people wiser than myself, like you told me. This is your triumph.

Thrice send these special chain mails to your friends,
Thrice sit thou mute while you ignore all trends,
Then thrice three times identify all bots,
And murmur soft "She will, or she will nots."

Go use your Tweeter feed for cute meme-sharing,
And fill your Facebook wall with cats misspelling;
Fear not to use headlines both true and fake
That all your vids and pics may be click-bait.

Then come, you hackers! troll with me a round;
Melt her hard heart with your nice virtual sound.
In vain are all my charms and all my feats:
She hath an art to break them with her tweets.